Most of us have at least one area where fat deposits just won’t budge, no matter how healthily we eat or how often we exercise. Rather than opting for an invasive procedure like liposuction, you may want to consider CoolSculpting.

It’s a non-invasive procedure that freezes fat to slim and tone your problem areas so they look more streamlined and in proportion. It’s been around for a while and, unlike the myriad of low-level laser and radio frequency treatments that promise to melt fat (they don’t; trust me I’ve tried them all), this technology freezes fat cells, and essentially kills them, allowing your body to process them and eventually flush them away. To clarify, this is not a weight loss treatment. It works best for those who are within their healthy weight boundaries but suffer from stubborn bulges. 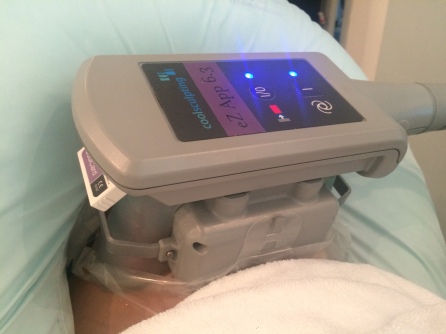 My treatment in progress

I decided it was time to tackle my unsightly love handles, so I headed down to the American Academy of Cosmetic Surgery Hospital in Dubai Healthcare City where I was set to discover this magical treatment firsthand. After a quick consultation and measuring session with the nurse, I hopped on to the treatment bed, which I’m glad to say was super comfortable as I was about to spend a considerable amount of time lying on it.

A gel pad was applied to my side to help protect my skin, and then the CoolSculpting device was applied and powered up. Once on, the applicator securely vacuums up the area being treated between the two panels where it stays for the duration of the treatment. After a few minutes, I began to feel the intense cold. This was accompanied by stinging and aching sensation. The discomfort lasted for around five to ten minutes before my skin was completely numb and I couldn’t feel a thing. The machine was left to work for an hour on each side, after which the area (which is literally frozen solid) has to be massaged and defrosted back to a soft state.

So two hours later and I was out to get on with my day. Whilst you may feel and look a little sore and bruised post-treatment, there’s no downtime and you can do almost everything you normally would. Exercise, particularly cardio,  is encouraged to amp up the fat flushing process.

So where does the fat actually go? The treatment causes the fat cells to crystallise and over a period of two months, these crystallised cells die, which signals to the immune system to send enzymes out that to break them down so they can be safely eliminated by the body. A fun fact of CoolSculpting is that once the targeted fat cells are destroyed, they don’t come back. If you gain weight in the future, the excess fat won’t be deposited in the treated areas—it’ll simply show up in other places, such as your face, thighs, or bum.

As I write this, it’s been seven weeks to the day since my treatment and so far the results have been amazing. After three weeks, my silhouette was considerably smoother and clothes that were previously tight around my hips seemed to fit better. Today my measurements showed that I’ve lost six centimetres from my love handles and I’m visibly more in proportion than ever before. It’s definitely a treatment that I would recommend and one I would consider doing again (back fat beware!).

Scent is one of the most delicate yet powerful parts of the human sensory experience. It can evoke memories and give off strong vibes, which is probably why it's become an indispensable part of our daily grooming routines. And with the explosion of thousands of brands on to the market, perfume has become an accessible... END_OF_DOCUMENT_TOKEN_TO_BE_REPLACED
When it's nearing 50 degrees celsius outside and I'm running from meeting to meeting, a quick spritz of a "clean-smelling" scent throughout the day keeps me feeling shower-fresh and energised.  (more…)
"Every woman has a feline side and every flower has a hidden animal essence." - Mathilde Laurent (more…)

Without a doubt, 2015 was the year of coconut oil, but it seems 2016 is set to be the year that turmeric takes centre stage. (more…)
You've heard the claims and read the studies; sugar is bad for you on a multitude of levels. It causes weight gain, diabetes and has countless negative side effects. But if the promise of a... END_OF_DOCUMENT_TOKEN_TO_BE_REPLACED
With the new year and events season in full swing and workloads steadily increasing, I have to admit my fitness has taken a backseat. I recently decided to ease myself back in to the fitness... END_OF_DOCUMENT_TOKEN_TO_BE_REPLACED

If you're well overdue a little "me time", this luxurious new body treatment will have you feeling polished and pampered from head to toe. (more…)
A Guide to the Best Beauty Salons Where: Carita Paris Salon (more…)
When it comes to spas, we here in the Middle East tend to lean towards the more extravagant options out there. And often the luxurious surroundings and state of the art facilities more than make... END_OF_DOCUMENT_TOKEN_TO_BE_REPLACED